Originally posted at my blog, Writing and Whatnot

There are few things more influential on our lives than those early years between childhood and adulthood, those years when we become aware of the larger world even as we discover the things that thrill us and struggle with those that cause us pain.

When I look back there are a lot of things that stand out. Good things and bad. Excitement and dread. Venturing out and withdrawing.

Through it all, there was one thing rarely sullied by the drama that so often made a mess of everything else: Iowa Hawkeye football.

Maybe it’s just the forgiving lens of memory, but something about game day was sacred. We forgot about jobs, homework, and struggling marriages and we focused on football.

There was lots of yelling, but always at the TV. Especially at Michigan! There were smiles all around, cursing at bad plays, and food. The food! Mom made a potato salad as mean as any linebacker and dad could make that Weber grill serve up a T-Bone that sizzled like a ball thrown on a quick slant.

Now I’m [REDACTED] years older and things have changed. College, marriage, writing a novel, and becoming a Minnesota Gopher fan just scratches the surface. One of the constants through it all has been that fall Saturdays still hold a glimpse of that same naive wonder I used to feel as a child. Now, football season is the one time of year when I set my coveted writing Saturdays aside and make my way to campus, or sit down in front of the TV.

Especially this week. It’s Minnesota vs Iowa, with Floyd of Rosedale (#ProtectThePig!) and another year of bragging rights at stake.

This year my (not so) little brother and his wife are coming over. The poor kid is still an Iowa fan and while we may not agree on who should win, there will be smiles, curses, beer, food, and fun. And who knows, maybe there will even be some potato salad.

I’ll write on Sunday, when the Gophers are 5-0.

When asked, "How do you write?" I invariably answer, "one word at a time."
~Stephen King

Happy Birthday today to Stephen King, one of my many writing mentors (unknown to him), whose skills I have tried to absorb through years of reading his many novels and short stories. I was pleased a number of months ago when I found this site (I WRITE LIKE): http://iwl.me/
…and when I pasted in my text it came back with the answer: Stephen King
Yes!
(Although when I tried a few samples of my writing here more recently they came back as James Joyce, Dan Brown and Chuck Palahniuk. Hmmm.)

Looking around my house I found over 50 Stephen King books (including one script and a few comics/graphic novels). I’ve only read 38 of them—a few are still in my writing stack partially read or unopened and waiting for me. A few I’ve read more than once—favorite tomes I’ll probably go back to and revisit someday.

For fun, in no particular order, here is my short list of favorite Stephen King books.

On Writing
It’s funny how I’ve met so many writers who have ONLY read this book by Stephen King. It’s good, especially the last chapter that talks about the car accident that nearly killed him and slowed down his writing for a while. BUT, his other books, you know, the scary ones, speak volumes more to any reader/writing trying to learn what is so good about his writing.

‘Salem’s Lot
A damned scary (and fairly traditional) vampire tale. Oh, it also a character named Mark—a 12-year-old who gets what is going on before most of the adults in The Lot.

The Stand
My favorite work by King. Great characters set in a post-apocalyptic plague world.

Pet Sematary
So gruesome I know at least one person who would no longer read King after reading this book. My favorite moments are the smaller, short stories within the story, like the time a prize bull was buried up in the cemetery.

The Dark Half
It’s about a writer with an evil twin. What’s not to like?

IT
Scariest. Clown. Ever.

Worst Stephen King Movie (As much as I love his books, I don’t think a lot of them translate well to the movies):
Sleep Walkers

Stephen King Book(s) I wish I liked more:
The Dark Tower Series
Everybody (but me) seems to love ‘em.
I’ll give them another try one of these days.

Most forgettable King book (to me):
Eyes of the Dragon
A sword and sorcery sort of tale. It is on my shelf, but I recall very few details of it (unlike his other books).

Next King book in my reading stack I want to read:
Under the Dome
I got it at a local appearance by Mr. King.
And Stephen King signed it. :-)

So Happy Birthday, Mr. King. Wishing you many more—and lots more writing.
Thanks for the entertainment, the scares and the writing lessons—one story/novel at a time.

What’s your favorite King book or movie?
Posted by Mark Teats at 12:15 AM 2 comments:

Being in the Scribblerati carries with it certain responsibilities.

A lot of people often come up to us (and by "a lot", I mean: None. And by "often", I mean: Never) and they say: "You Scribblerati... you're pretty awesome. Pray tell, what kind of things do you like, because I would very much like to like them too. I would love to stroll about town and lord my new found tastes over the heads of others' much more inferior tastes while laughing, taunting them until my throat is sore, saying: 'ha ha, jerks, you're not cool like me and the Scribblerati!' Simply put, that would be... heaven."

Your cries have not gone unheard...


Some Recommendations
by Jon﻿ 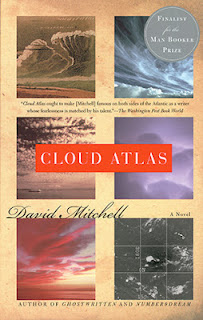 By David Mitchell, in its own words:

"A reluctant voyager crossing the Pacific in 1850; a disinherited composer blagging a precarious livelihood in between-the-wars Belgium; a high-minded journalist in Governor Reagan’s California; a vanity publisher fleeing his gangland creditors; a genetically modified “dinery server” on death-row; and Zachry, a young Pacific Islander witnessing the nightfall of science and civilisation — the narrators of Cloud Atlas hear each other’s echoes down the corridor of history, and their destinies are changed in ways great and small."

Fantastic and soon to be a major motion picture. I intend to both read and watch the hell out of it. See the trailer here. 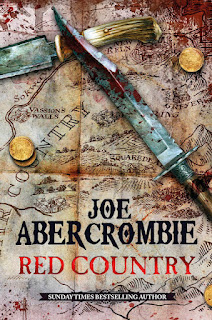 By Joe Abercrombie. It's not out yet; that fact drives me nuts. However, it will be out around my birthday... ahem... Anyway, this will be his sixth book of an intended nine, all of them set in the same world, and the third and final one in the middle "loose" trilogy. In its own words:

"They burned her home. They stole her brother and sister. But vengeance is following. Shy South hoped to bury her bloody past and ride away smiling, but she’ll have to sharpen up some bad old ways to get her family back, and she’s not a woman to flinch from what needs doing.  She sets off in pursuit with only a pair of oxen and her cowardly old step father Lamb for company.  But it turns out Lamb’s buried a bloody past of his own.  And out in the lawless Far Country, the past never stays buried. Their journey will take them across the barren plains to a frontier town gripped by gold fever, through feud, duel and massacre, high into the unmapped mountains to a reckoning with the Ghosts.  Even worse it will force them into alliance with Nicomo Cosca, infamous soldier of fortune, and his feckless lawyer, Temple, two men no one should ever have to trust…"

1. Cabin in the Woods
It has come to my attention that not very many of you have seen this film. What is wrong with you? Seriously. For real. Seriously, what's wrong with you? The film is directed by Joss Whedon. It stars Thor. It's so meta, you'll shit. Seriously. One of the best films of the year. A geek must.

2. Detention
Okay, with this one I will just go ahead and assume that many of you haven't seen this film either. Don't feel bad, Joseph Kahn also directed Torque (barf). As a result, there are only 12 people on the planet, including the cast and crew, who have heard of this film, let alone actually taken the time to watch it. I am one of the lucky few. Part teen comedy, part slasher flick, part scathing indictment of society, part time traveling adventure, part sci-fi horror, part 90s nostalgia trip, part sarcastic laugh riot, part Space Bear snuff film, part domestic terrorism thriller, part meta-comedy (you will also shit), this film is absolutely worth your time, although you won't think so at first. At the very least, wait for the moment when the kid remembers different eras throughout 19 years of detention. And yes, I'm recommending it, even though Dane Cook is in it.

Comics﻿
Sequential art, cavemen loved and respected it, why can't you?

1. Prophet
Rob Liefeld created this character. Are you familiar with his work? No, read this, we'll wait. Ah, you're back. Please join the others in looking at me and my recommendation somewhat dubiously... Go ahead, because I'm serious. This is a good comic. Really good. But, but... you say. How? How can a comic book featuring a character by one of the worst in the industry from a time when comic books seemed to be competing to be the worst of the indutsry (the 90s), actually be good? Well, for starters, Liefeld isn't involved. As a result we get an intergalactic, far-flung-future tale of clone soldiers on insane alien planets. They live for the mission. They die for the mission. It all reminds me of an arty Doctor Who or Star Trek, but crazier and a shit ton more violent. I don't do it justice. Trust me. Classic Sci-fi. Great art. Fantastic designs. 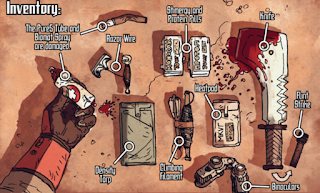 2. Locke and Key
Joe Hill is the son of Stephen King. He is a writer. Not since Dick Grayson has a man been more doomed to exist in his father's shadow than poor old Joe. The good news is: He's pretty all right. In fact, he's actually pretty good, as evidenced by this fantastic tale of the Locke family and their lives in the aftermath of trajedy while living in the family's ancestral home: The Key House. It is weird and rambling old structure set at the tip of a strange little island at the far flung edge of Maine, a place well known for odd. Oh, and also, the house is full of locked doors and keys, find the right key and the right door and odd things happen. Become a ghost. Beome an old man. Become a giant. Mend things. Alter time. Bring shadows to life. Switch genders. Steal memories. Go anywhere. But what does the Black Door Key do? And who is the ghost woman trapped at the bottom of the well... 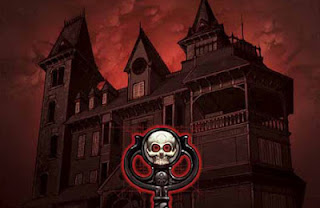 TV
This and beer keeps us from going crazy.

1. Louie
There are few hard luck cases like Louie. He is the hang-dog man, sad-faced and trod upon. And hilarious. And brilliant. Riotously funny. Suddenly serious. Shockingly insightful. Often kind of gross and pathetic. But still great. It's a show that is constanly in flux and always innovative. The episode where he and Robin Williams go to a funeral? Genius. This is a man's life, so sad, so entertaining...

2. Archer
There are few things as awesome as Sterling Archer.