This week I thought we'd try something new.

Writing a novel on your own isn't easy during the best of times. The real world can often work against you, making each page an uphill slog, facing down giants and monsters. I recently started a new job. This new time requirement has severely interrupted my writing schedule, my current WIP's fight for the high ground has slowed to a crawl. As writers, I'm sure this sounds familiar to you, it's an issue we all face, we fellow part-time writers still shackled to our day jobs. It's definitely something I've had to deal with before, and I've found the best thing to do, at least at first, is to just focus on the new job. Don't worry about the work. Go. Settle in. Establish your new schedule. Learn the ropes. After a week or two, you can come back, sit down, pick up your work, and start slaying those giants again.

Granted, sometimes this can be a whole new issue... 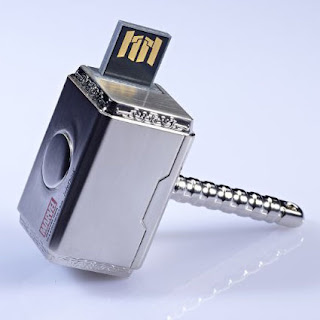 You must be worthy...

To combat this, I've decided on a new schedule, a somewhat flexible two hour block of writing each day, some dedicated time to sit down and work on something. Y'know... to ease back into it. It's a new thing. It's only been in place for a week or so, and to be honest it's only been mildly successful so far, hence the inclusion of the word "flexible", but I'm working on being better about it. An important facet is there's no pressure, just continual effort. Butts in seats, people. Butts. In. Seats. Focus on that. That's important. The rest will come. 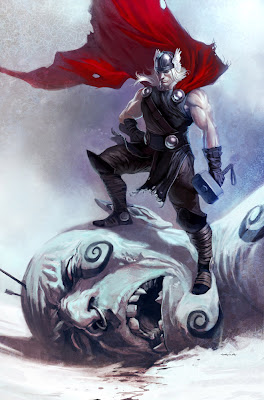 Working on some side-writing is one thing that can help get you back into the fight. Blogging, for instance. Short stories, maybe. Or maybe, if you don't want to veer too far from your WIP, how about Flash Fiction? Flash Fiction is a style of extreme brevity, 300 to 1000 words. Short, sweet, and to the point.

Let's try it out, shall we?

I posted a picture below. I found it on-line, I'm not sure where it came from, so if it's yours, let me know. Otherwise, for the rest of you... Click on it. What do you see? Write it down, and if you're so inclined, post it in the comment section. It'll be fun. Just keep in mind: 300 to 1000 words only. Also, I recommend that you write your own story first, before you read mine, just to see how close--or how far apart--our worlds turn out to be... 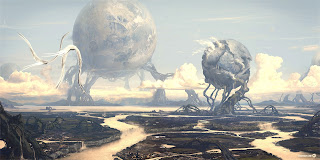 Harrison Holliday leaned on the chromed railing, listening to the soft clink of ice in his drink and the distant groaning dirge of nascent worlds ripening on the vine.
The great marshland steppes of the World Garden stretched to the horizon. From high atop the lustrous ivory needle of the Sales Tower, cool breeze tickling at his face, Harrison could see dozens of young planets. They rose above the clouds, slowly coalescing, swaying on thick green stalks as wide as a city. He watched oceans of water sluice from them, land masses heaving, cracking and rumbling, crashing together, thundering, booming echoes.
A sound from long ago, from the days of his bone thin youth, days of panting in the stagnant heat, the damp-cotton-thick humidity, knee-deep in squelching muck. Whenever the Overseers and their spark-sticks and the choking diesel smoke of the Weeders were across the fields, in those moments he would pause and look up into the azure sky. The other Sprayers would trudge on, bent under their sloshing canisters of Pesticide, eyes down and hunting for the small green shoots poking from the mud, but he would look up, the huge sphere of a growing nu-world looming overhead, and watch the brilliant white flights of marsh birds wheeling out of the sun’s glare, swooping among the vines, soaring on slow wings.
He would watch them fly away, a molten brand of longing twisting in his guts.
His eyes fell on the Work Camps, the sprawl of muddy hovels clinging like a rotten fungal shelf to the Garden’s edge, to a land of upheaval, shattered by giant arcs of twisted roots. He tossed back his drink, amber fire burning down his throat, and looked up into that same azure sky, seeing a far off gleam floating in low orbit high above.
“Impressive, isn’t it?”
He turned. A smiling young woman waited. He recognized her model. Beautiful in a pre-packaged way, precision styled, bred in the Customer Service Vats to be preternaturally personable. Sales. Lens embedded in the center of her pale blue eyes whirred and focused.
“Words can’t describe,” he said.
“Mr. Holliday,” she extended a slim fingered hand. He shook, feeling warm skin that must have cost a fortune. “How can we be of service today?”
Harrison glanced past her, eyes skipping over the man standing on the other side of the Observation Deck. Big and built, powerful, an aggressive, military grade model, with a neck like a bull and a face like it was cut from granite. There was probably a titanium chassis under his skin and a wolf’s lust for blood programmed into his brain. His black suit hung on him like a Butcher’s Apron. The man didn’t move. He just stared.
Harrison turned back, a friendly smile. “I need to buy a planet.”
“Well, you have come to the right place, Mr. Holliday.” She linked his arm in hers and turned him back toward the slow creaking sway of the World Garden. “Voluspa Origins Industries is the leading producer of Nu-worlds,” she said. “With our patented Hephaestus Forge Engine, we now have over 6 dozen spinning in four different star systems. Building Universes for future Worlds,” she chirped proudly. “Now, if you’ll let me know what you’re looking for, I can help choose a world best suited to your needs.”
A quick wafting puff of perfume.
Subtle tendrils of lilacs, lilting, soft as kisses.
He inhaled, felt it drag down into his lungs, felt it wrap his brain. Intoxicating, stupefying. She smiled, dazzling white. Harrison bit down hard, splitting the capsule hidden under his tongue. A wash of icy cold clarity poured over him.
He blinked and grunted, suddenly wide awake. “Colonization,” he clarified.
Her perfectly arched brows drew together, confused, examining him, lens re-focusing. “Artificial?” she asked, probing.
“Human. Nu-worlds. New possibilities. Right?” He said, “Just like the commercial.”
“Human colonization?” An indulgent look, “The paperwork for an M-class is no small matter, Mr. Holliday, approvals, regulations, controls, corporate licensing,” she said, “not to mention the price...”
“We’re solvent,” He held out an open palm, lines of data hanging in mid-air, sparking like chain lightning between his fingers, “I’m sure you’ll find everything in order.”
Doubtful, but compliant and Sale-hungry, she reached out; a single fingertip touched his own.
It was like a spark of static electricity, a harpoon spike of data thrown across a vast gulf in that instant of contact. She froze, mouth half-open. He gripped her hand, held her steady, one eye on the Security Bull across the Deck. She twitched as her programming was flayed. The virus was like a squirt of crimson into clear water, staining, infecting, and then leaping across her uplink. She jerked and snapped, eyes rolling white, falling in a heap to the teakwood deck. The Security Drone took a single step, hand inside his black coat, and then he crumpled too.
For a moment, Harrsion Holliday let the cool wind ruffle his hair, listening to the distant creak and boom. The Program pinged as it ravaged the security net, once, twice, all clear. Far below in the bowels of the tower’s command center, he imagined chaos, while out on the vast marshland steppes, he knew the Gardeners were just now noticing, turning in the swampy, fly-swarmed dank as the Overseers dropped and the big chugging bulk of the Weeders rolled to a stop.

He opened his commlink.
“Packaged delivered. Door’s open.”
High above, he saw the distant low orbit gleam respond to his signal, blooming little bursts of orange fire. Tiny shapes darted away, the silver glints of fast attack ships turning toward the surface in a wide arc, engines screaming as they burned through the atmosphere.
Out in the Garden, the Harvest Charges thundered and flashed, the virus igniting them. The stalks splintered and groaned and the nu-worlds broke free.
All the way out to the horizon, he saw Nu-worlds start to rise, half-crumpled balloons, too young, too soon. They cracked and crumbled and broke apart in the freezing vacuum of space.
“Nu-worlds. New beginnings,” he said to the sound of far off cheers.

This past May I had one of my bug stories critiqued at Wiscon. The Pro for our group, Vylar Kaftan was incredibly encouraging as well as generous with her knowledge of writing craft. We spent some of our conversation discussing titles. Because she hated mine.

With good reason. (And that was about the only thing she hated about the story; overall she said very, very nice things and made many perceptive comments toward improving it.)

I struggle with titles. Just like I struggle with names. Sometimes I hit a name/title that I immediately know is exactly right. Once We Were Bears. Scrapie. Odonata. But more often than not I struggle.

Here's what I wrote down as her advice about coming up with good titles.

3) Don't have your title be too long

8) Know that you can't always come up with a great title; sometimes you have to settle for the best you can do

And here were the pre-Vylar titles for the currently written bug stories:

Look again at her advice and ask whether I've even come close? No, no, and no. I kind of liked the mystery of those titles. They are all cool words and are integral to what happens in the stories, but I do think Vylar's right; they just aren't going to pull anyone in. She came up with the second story's new title "Old Glassy's Way." I loved it as soon as she spoke it. It captures what the story is about and gives a better sense of the world I'm creating than "Exuvia" ever could.

But I still haven't figured out what the other two should be called...

Got any favorite titles that keep to or break Vylar's rules? (The Lord of the Rings, for one.) Comment or Blog away!